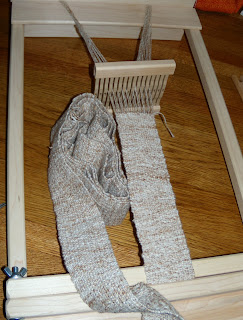 I had woven as far as I could on the strap

and I cut it off the loom- 102" long, about 2" wide, 2.5 ozs of handspun cotton yarn. I packed the weft tightly so that it would be a sturdy strap. It took me awhile to get the rhythm, and to keep the selvedge even. 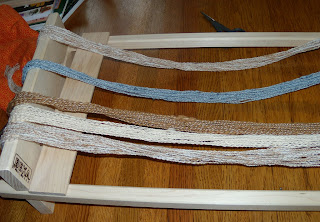 I used my niddy-noddy to wind the warp- it makes a skein 60" long, which I thought would be long enough (I learned later just now much warp at the beginning and end is unusable, but it still worked out). 18 strands in each section. 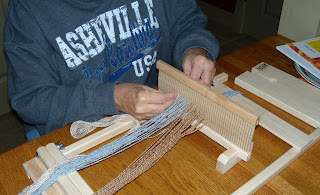 I used a very small crochet hook to thread the heddle (I'm sure there are weaving words for that action, but I don't know them) 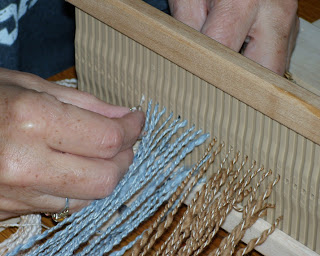 There's a reason why no one says *Gosh, I love warping a loom*. 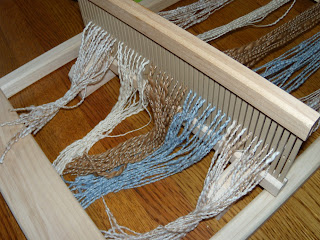 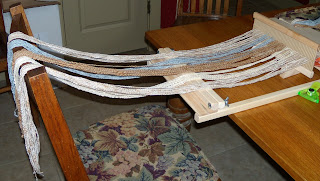 ...now I have to pull the warp through the heddle and wind it on the warping beam (in this case, a board). 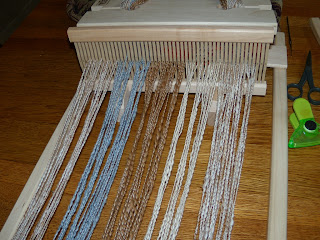 It's a slow process, prone to tangles... and bad words... 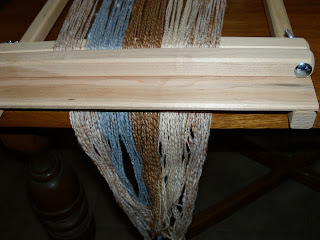 Lots of leftover warp (I know better how to deal with that now- with less wasted yarn). 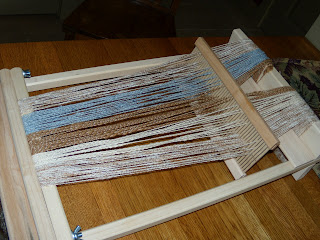 All warped and ready to go... 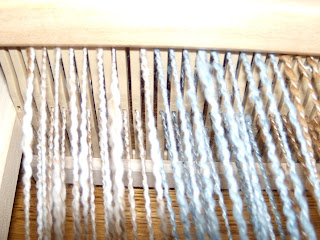 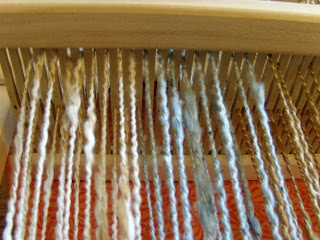 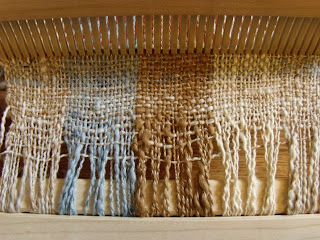 First few rows- I also know now how to make that look neater and more even (I love Facebook- it's full of wonderful teachers). I'm actually glad that I used the smaller heddle- here and there the slubs in the yarn hung up on the holes, but for the most part, I was able to weave the cloth just fine. 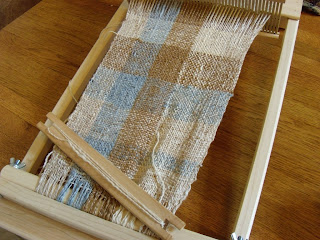 Not bad for a first try, eh? 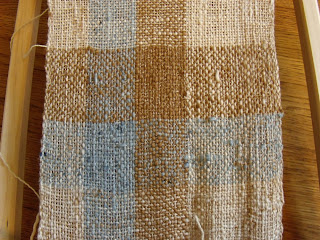 It's subtle for a plaid, but still pretty. BTW- the blue yarn was spun from recycled blue jean cotton, the rest of the shades are natural cotton colors. You can see a couple of my mistakes... 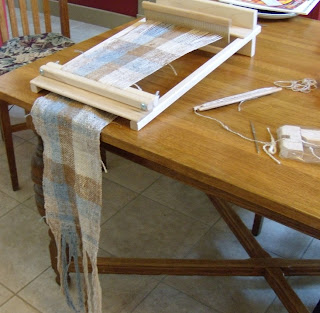 It took almost less time to weave the cloth than it did to warp the loom. 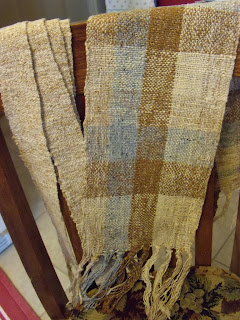 28" of cloth, 7" wide (after washing- it shrinks a bit). The fringes won't last, I just tied them to keep the ends from raveling during washing. 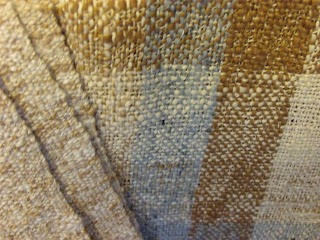 And I'm already planning my next loom. Mary- it's all your fault.

Posted by Kathleen Taylor at 8:07 AM

Weaving is a wonderful thing and you are doing great. And I guess I am one of those few that loves to warp a loom. But you are right, it takes just as long (sometimes longer) to warp a loom then it does to weave the warp off. Can't wait to see more of your projects in the future.

It's my fault and I'm scared because I bought a loom too!

Really, REALLY nice!! It almost makes me want to try weaving myself...almost. LOL I'll stick to what I know best and that is drawing. :D