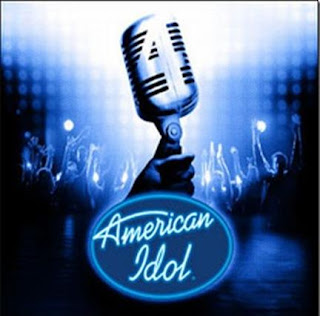 162 Girls made it through to the Hollywood rounds, not that we've seen (or heard) even a fraction of them. Ryan and AI both say that these girls are the best of the best. It's hype, but I also know that they hope it is so. The show wants a female winner. Badly.

Like the guys, the girls are overwhelmed by the big stage and the stress. And as with the guys, we're promised drama, drama, and more drama. And tears (which is very like the guys- lots of weeping last week).

Randy is in a gray suede jacket over a gray shirt. Keith never wears anything interesting, so I'm going to stop talking about his clothes. Mariah has a teeny little leather biker jacket over a blue scoop-neck dress. And by teeny little, I don't mean too small, I mean that the jacket itself barely hangs past her armpits. Seriously, it's the shortest jacket I've ever seen. It's a leather collar with sleeves. And zippers. Nicki is in a straight black wig with with bangs, and a prim high-necked gray shirt (dress? I don't know, we don't see her lower half).

Again, the girls are divided into groups and they take the stage, 10 at a time, each to sing something a Capella. The judges deliberate as soon as the group is finished and eliminations take place immediately. Survivors go on to the group performances.

Angela Miller is a pre-blonde Miley Cyrus in a striped top and a floaty skirt. She tries way too hard.
Victoria, the mariachi singer, is in a sparkly raspberry top and black leggings. She has potential but there were some off notes.
Mariah, the former anorexic, is in a strapless horizontally striped, gray knit long dress. She sings with a whole lot of waver.
Angela and Victoria go through. Mariah is philosophical.

We see lots of cuts, including the large and bafflingly blonde Ashley. I did like Ashley in her audition.

Rachael is in a blue, vaguely Eqyptian top over black leggings and brown knee boots. She's awfully screechy.
Janelle is a country girl, in a plaid shirt and red fringed boots. She has the better voice and tone of the two, but she's still oversinging.
Both Janelle and Rachael go through, and possibly a few more girls from their group because a whole passel of them dance off the stage, all excited.

Candice Glover, from last season, the one Nicki expressed a desire to skin and wear she loves her so, still has a great voice. A really great voice.
Meghan, of the Pocahontas outfit, crutches, and the delayed surgery is all healed now. She's also wearing a great big bow on the back of her head, and short shorts. She oversings.
Of this group, Lauren and Sheila (neither of whom were heard- maybe ever) and Candice are through. Meghan heads home.

Isabelle, in a white sparkly dress and blonde hair sings Summertime with a smile on her face, and without even a hint of soul or heart. She goes through too.

The final solo grouping consists of 4 girls, the only one of whom I remember is Kez Ban, who is evidently a girl, though I'm still not betting the farm on it. Kez Ban is wearing a black leather thrift store jacket, a fedora, and plaid scarf. I can't tell if her hair is still shaved on one side because her fedora appears to be glued on tight. Kez says, astutely, that she doesn't fit in anywhere. Kez appears to be ill and her voice is the worse for it. But all 4 of the final solo group goes through.

The girls seem to have caught wind of the new assigned groups. They're not happy about it, but at least they're not blindsided by the arbitrary selections.

The next morning, 19 exhausted (and a high percentage of them woefully under prepared) groups show up to perform for the judges. The groups perform together but they live or die (figuratively speaking) individually.

Randy is gone, Mariah is in diamonds and a tight purple dress. Nicki is wearing a quilted black leather jacket and an exceptionally blingy cap over the black wig.

Warning: I can't guarantee that I wrote the group names, or any of the group members' names, down correctly. I tried, and frequently I failed.

First up, the Swagettes: Melinda, Candice, Denise, Kamarie. These girls are all wearing crazy outfits. They can also sing. And their harmonies are wonderful. All four are through. Yay!

Next Raisin' Cane (Caine? Kane?). We have lots of teeth and thin-voiced country harmonies. They sound like high school talent show contestants to me, but Morgan, Lauren, Brandy, and one other girl all go through. Brandy was the best.

Almost Famous had major drama, and majorly horrible skanky outfits. They... I have no words. They're singing Somebody That I Used To Know in street-corner hooker outfits, and we're not talking upscale corners, either. Only Dasia goes through, and though Dasia says nicely neutral things about the other group members, they are purely nasty (alone, and en masse) about Dasia. Wow.

The Dramatics are living up to their name. Janelle refuses to speak to the other members- she walks off when they talk to her, she turns around, she goes and sits on the other side of the room. They finally give up on her and rehearse on their own. All four go through, and in the post-performance interview Janelle says how much she learned from all of the others in the group. They laugh out loud- at her, not with her.

Shuba, Sarina-Joi, and Aubrey each are the only ones moving on from their groups.

Urban Hue consists of Seretha (of the beautiful little tutu girl and the severely injured boyfriend), Tenna, Kiara and someone else. They all sound terrible but for some reason only Seretha goes home.

I have no idea what the next group's real name is- Poosnaps? Boosnaps? Boot Straps? At any rate, Zoanette (in more hooker wear and impossibly-constructed hair), Isabelle, Erin and Lauren. Only Lauren is sent home, and again I don't know why any of them went through.

The Handsome Women are Courtney, Liz, Shira, and Alicia (whose head is entirely shaved on one side). I don't know if Liz is getting the Hero Edit, but it certainly looks like the other girls ditch her entirely. Liz finally finds them during their pre-performance interview. She overhears them saying really nasty things about her. Alicia demonstrates how she would like to stomp all over Liz. Their singing is pretty bad, and their choreography is even worse, but I chuckle when only Liz goes through.

For You (Youth?) is a mixed bag- one platinum blonde with very red lips, a brunette with a disaster of a headband (around the head, not over the top), a leopard print mini dress and a Gibson Girl bun, and a girl in a regular looking gray dress. Their evening rehearsals are horrible and they decide, in the morning (hours before performance time) to change their song. It goes Badly. Very very badly. Lyrics written on the hand badly. And yet Very Very Blonde and Normal Dress go through. Why?

The Montage of Bad tonight also features many many girls who are unable to memorize song lyrics but who are able to write on their hands and arms with Sharpies.

Dolly (Dali?) Chicks are uniformly annoying. Well maybe not uniformly- Britnee (in an annoying headband), Cree (sulky brunette), Haley (no distinguishing features), and Brandy (maybe the most obnoxious person we see tonight). Each has her own way of making me want to throw things at the TV. Throughout rehearsals Brandy declares herself the leader of the group, as the only one who understands music, as the one who can harmonize and is therefore superior. Brandy is a very hard person to root for, which  makes it all the more satisfying when she is the only one of the group who is cut. Brandy is bitter.

The final group of the night is The Misfits. Now I really loved Kez Ban in her audition and I get it that Kez is unique, and that she's quirky, and that she's not exactly a team player. And that she's ambivalent about being on the show in the first place. I also get it that she's probably challenged in a couple of ways. But man, I don't understand why her group-mates didn't just rise up and kill her. She's that hyper, and uncooperative, and annoying. Every single minute. On stage, Mini Miley and Janelle sound okay (though Mini Miley oversings horribly), and Kez seems to blow her part entirely.

And yet, all four go through.

Tomorrow night, more solo performances, where the 46 remaining girls are winnowed down to 20, and where the final 28 guys are cut to 20 as well. It should be interesting.
Posted by Kathleen Taylor at 11:05 PM