I'm at the stage in every festival where the classes are going very well, but I'm just too tired at the end of the day to write a blog post. Today is the final day of my classes (though the Michigan Fiber Festival only officially opens tomorrow), and we're going out to supper tonight (it's The Hub's 60th Birthday), and we're leaving tomorrow morning, so the wrap-up posts may not happen until I get home.

In the meantime, yesterday was interesting. The Weather Folk had warned of thunderstorms and gusty winds all week. The morning dawned cloudy and cool. 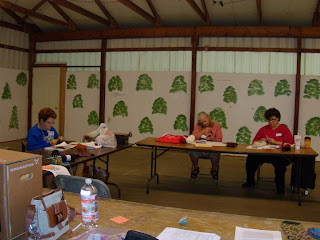 My Nordic Christmas Stocking class had started and was going well (as always, I had Genius Students) 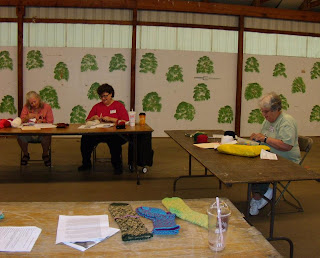 Oops, there's my empty McCafe cup. This is my second year of teaching at the MFF, so not only am I meeting up with friends from last year, but some of my students (Bonnie and Carolyn) were repeats, which is always wonderful. And Bonnie, on the right, vends not only at MFF but also SAFF, so we run into each other a couple of times a year.

The skies got progressively darker. 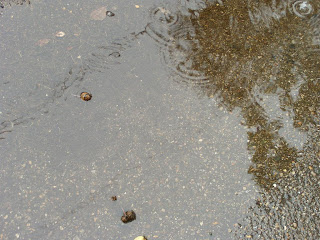 And it started to rain. And then it started to rumble. And then the flashing began. Do please remember that my classroom was in a barn, which is not exactly the safest place to be in a thunderstorm. And it was a doozy- within about a half hour, there was a steady flash and boom. Over the PA system, we were informed of the evacuation procedure, and the safest place to huddle, in the event that a tornado formed (the bathrooms, which were not attached to the barns).

In all of the years that I've been teaching classes, this is the first time we've had to consider running for our lives. It made for an interesting hour or so, especially given that I Don't. Do. Lightning. However, I pulled up my Big Girl Panties and managed to teach the class without perching underneath the table and howling like a frightened puppy.

After an hour of storm, and maybe another hour of steady rain, the clouds broke. Afterward, it was cool and damp. 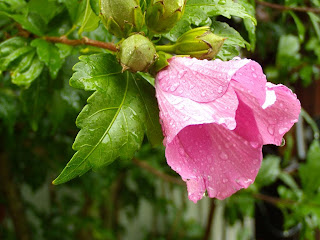 I have no idea what this flower is, but it was beautiful after the rain. 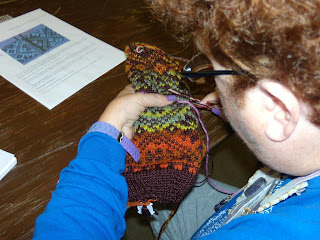 And knitting happened even during the storm. By the end of the day, Carolyn was ready to take out the waste yarn for her afterthought heel. 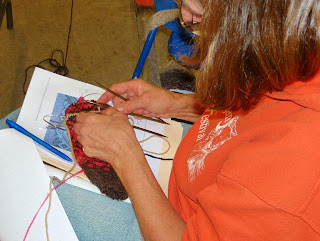 She wasn't the only one.

I survived to tell the tale, though I admit to having a glass of wine when I got back to Home Base.

I finished my class stocking as well, though I forgot to take a pic. Today's class is a design class- mentally intensive but not a lot of knitting (students may begin knitting their original design if they have time, but the majority of our day will be taken up with drawing and charting).

It's been wonderful so far, and today the predicted high is 72 degrees. I'm taking a sweatshirt.

Oh- we've been tasting local beers. This one is very good- a fruit beer... 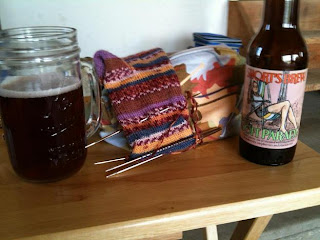 and I finished Road Socks #2- these are staying with Jayne in Michigan. 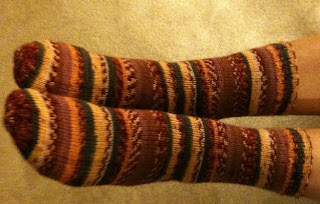 If I don't blog tonight, I'll try to on the road tomorrow. Catch all y'all on the flip.
Posted by Kathleen Taylor at 5:50 AM

Cant think of a better way I would like to spend a rainy day.

Looks like a Rose of Sharon. We have lots of them in Western NC because they grow happily under black walnut trees.

I have bunches of those flowers in my yard which I brought from the home I grew up in. I think Rose of Sharon may be the official name but we always called them hollyhock bushes. They come up by the scores each year wherever the flowers fall. Your picture is very pretty.