My sisters, their husbands, The Hub and I planned to jaunt just over the border from California, into Los Algodones, BC, Mexico during the Yuma trip. A couple of the husbands (who shall remain nameless) were leery about the excursion, and none of us wanted to drive out of the country, so we parked in a large lot ($6 per day) and walked across.

I had hoped to take a picture of the big gate, our entry into a whole other country, but there were large signs prohibiting photography at the border crossing (and young men in uniform, carrying large guns nearby), so I kept my phone in my pocket. I had my passport ready to show, but going into Mexico was just a matter of walking through a rusty metal turnstile. United States on one side, Mexico on the other. No questions, no identification, no one even watching us (well, I assume there are cameras everywhere, but there were no border agents standing there).

The border itself opens at 8am, and we were right on the dot. The morning was sunny and cool, and though we were early, there was already a stream of people lined up to cross. My youngest sister and her husband visit Los Algodones every time they come to Yuma (only about 14 miles away), so she told us what to expect. Still, it was something of a shock.

As we stepped into Mexico, the first thing I noticed was music blaring from unseen loud speakers. That music? I'll wait for a moment so you can guess... you're going to guess wrongly...

It was The Carpenters. Singing in English. Not mariachi, not even The Tijuana Brass or Gloria Estefan (yeah, I know she's Cuban, but still). Karen Carpenter... so odd.

Just over the border was a public restroom. As per my sister's instructions, I gave a quarter to the elderly male attendant who sat outside the single stall room, and waited my turn. My sister had already told me not to flush the TP- that's what the waste basket next to the toilet was for (insert small shudder). Back outside, the attendant gave me a paper towel (hence the quarter), and he squirted a bit of soap in my hand, and I washed at the rust stained sink.

And then we walked into town, to the four-block market area. 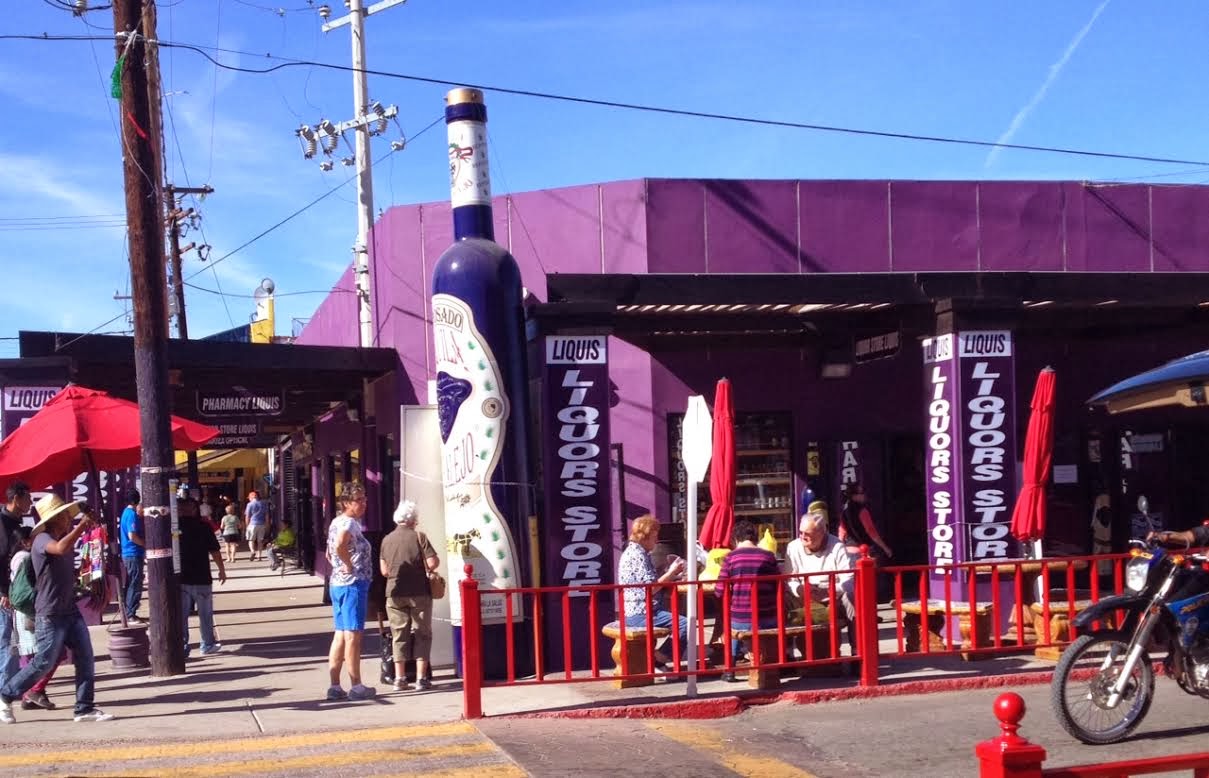 The liquor store was huge, and the street was lined with more dentists in a single area than I've ever seen, or imagined, in my whole life. 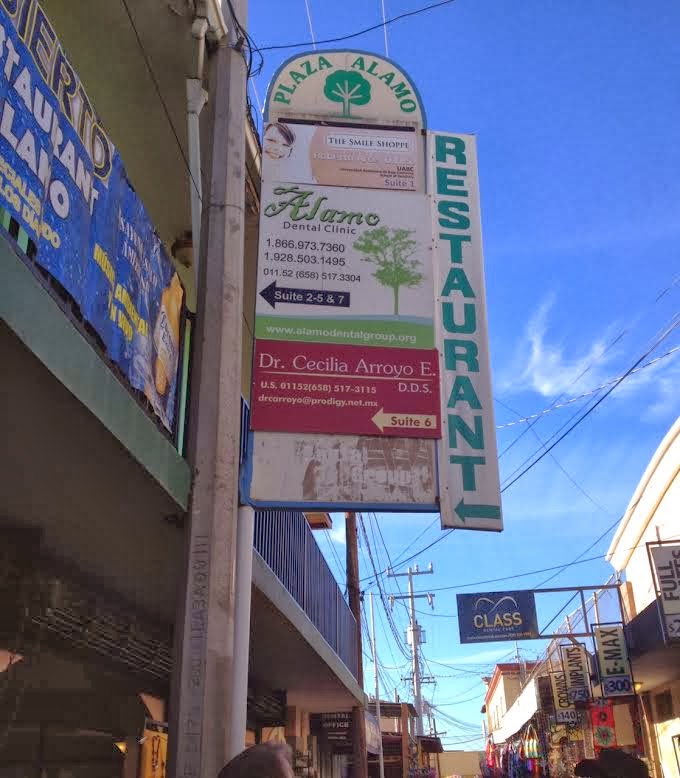 I think there were at least 35 different dental offices, ditto optometrists and surgeries. Also Pharmacies, mainly because many US prescription medications can be bought over the counter in Mexico. 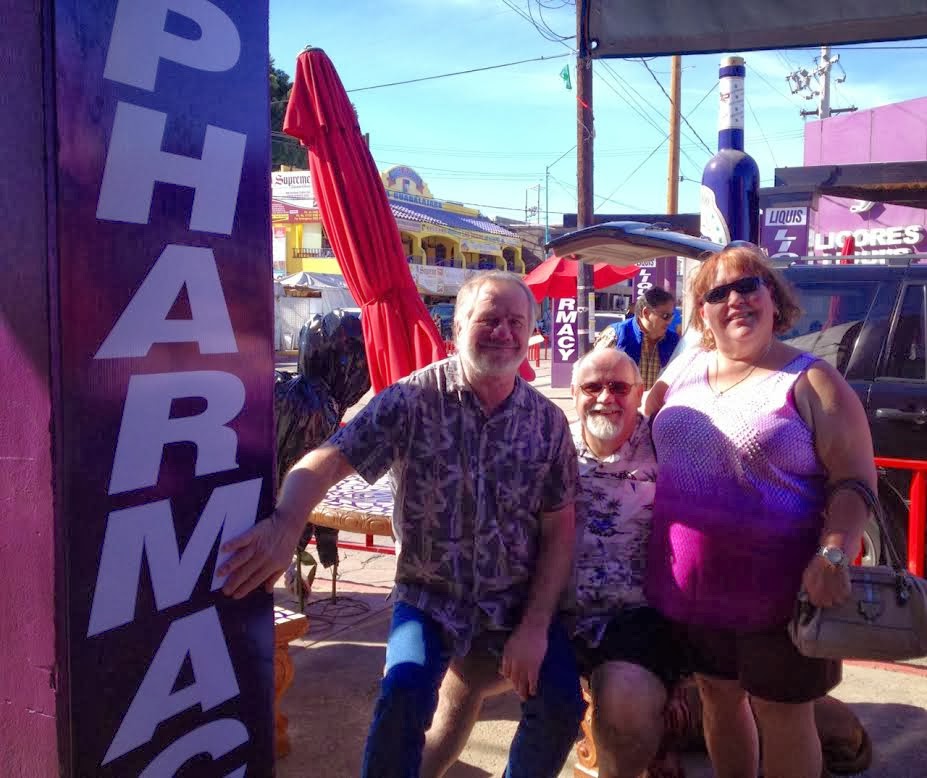 The streets were lined with narrow corridors of vendors, many of whom were setting up on our first pass through. My sister had already told us about the system- that vendors would put necklaces and bracelets on you, that they would touch your shoulders and arms, that they would follow you to sell you their *silver* and *turquoise* and *gold*. She emphasized that we were going to have to bargain for each purchase (we were warned about that in The Bahamas too, but it never happened). So I was ready, sorta, for the onslaught. 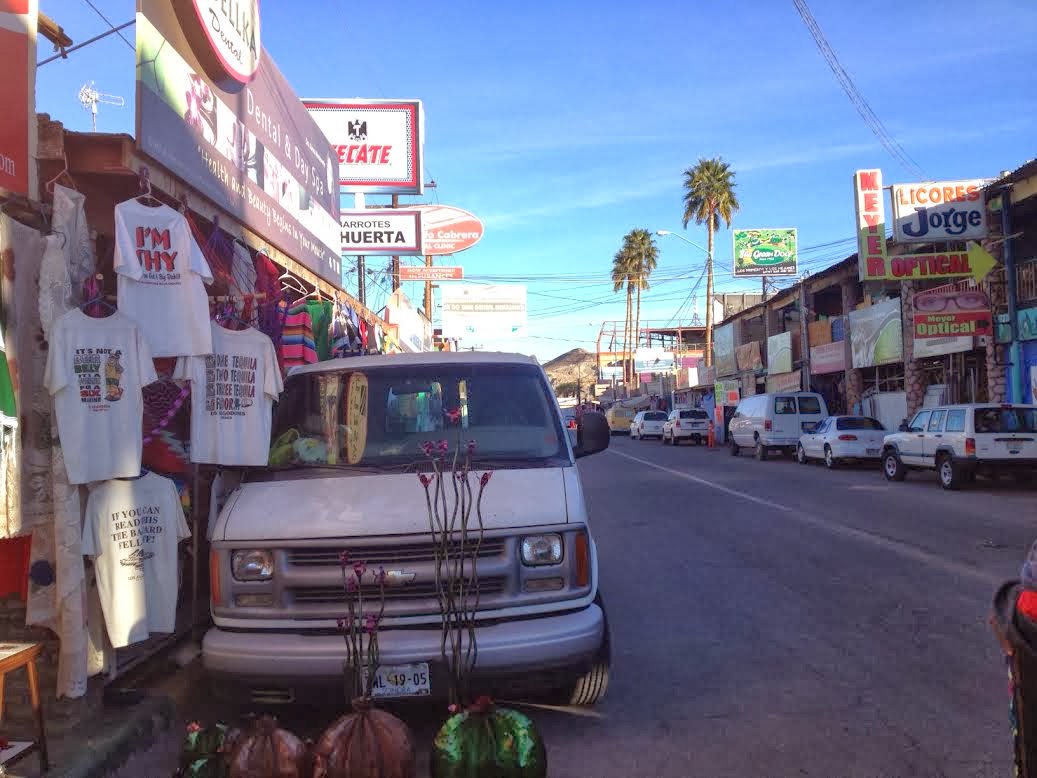 The wares were fascinating, and the whole experience was a sensory overload- cash and intense bargaining for jewelry and tee shirts and leather goods and lawn ornaments, with the storefront folks all shouting as well. I just kept my hands in my pockets and tried not to make eye contact with the sellers, and I learned to say no quite sternly.

All this is not to say that it wasn't great fun. It was, the colors and the sounds, and as it got closer to lunch time, the smells, were amazing. Many of the vendors carried exactly the same kinds of goods, making choices either easier (or more difficult) depending on how you looked at it. 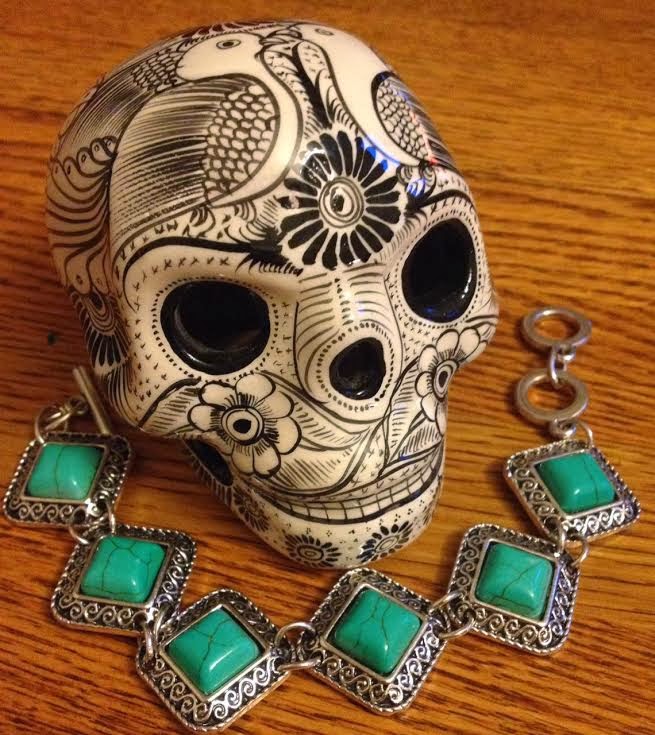 I only bought two things. I fell in love with this hand-painted ceramic Day of the Dead skull for my son, who collects such things. The vendor said $5, and I didn't even argue with him (frankly, I had hoped to bargain down to that amount). And this bracelet, which matches the outfit I was wearing that day. I knew full well that it was not real silver or turquoise, but for $10, I was perfectly happy. 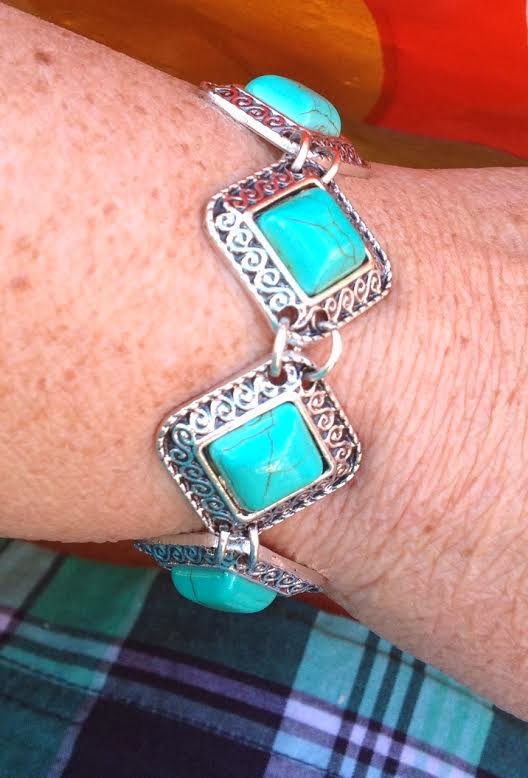 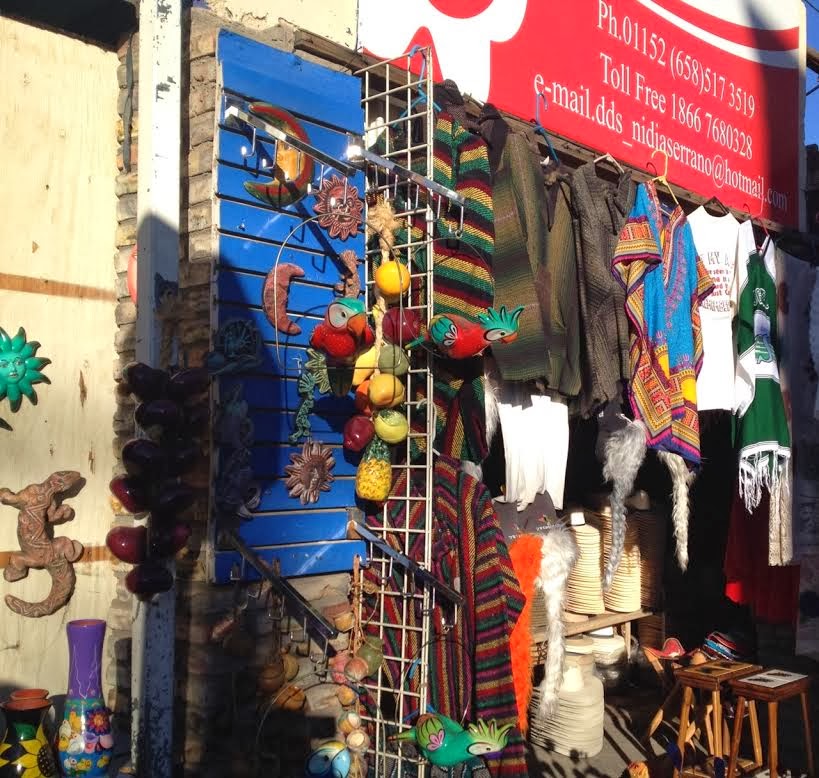 The colors and the sounds were overwhelming. Those are wigs, btw, not hanks of wool and roving... 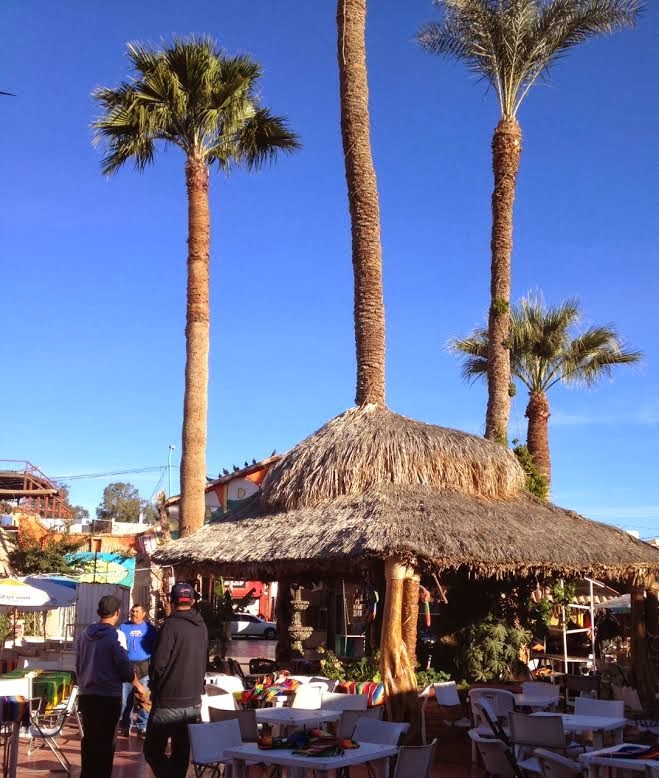 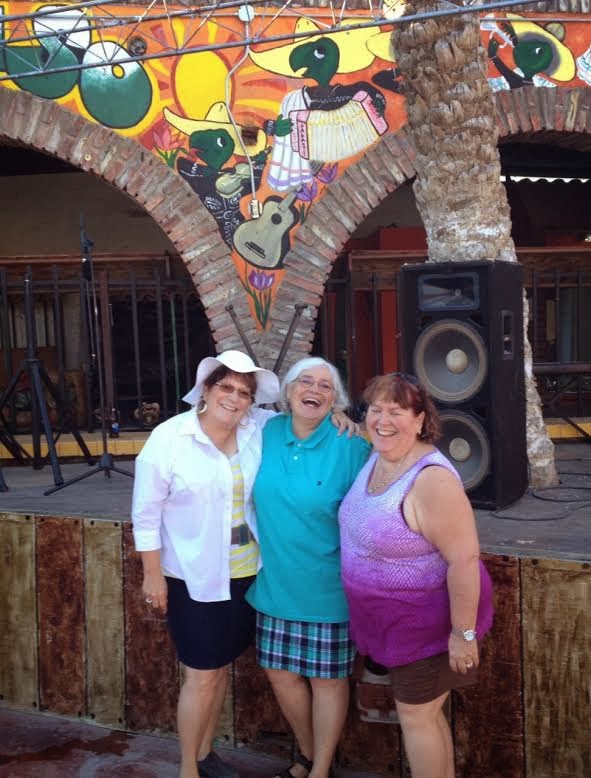 We were too early for the live music, but at least the recorded stuff was in Spanish. 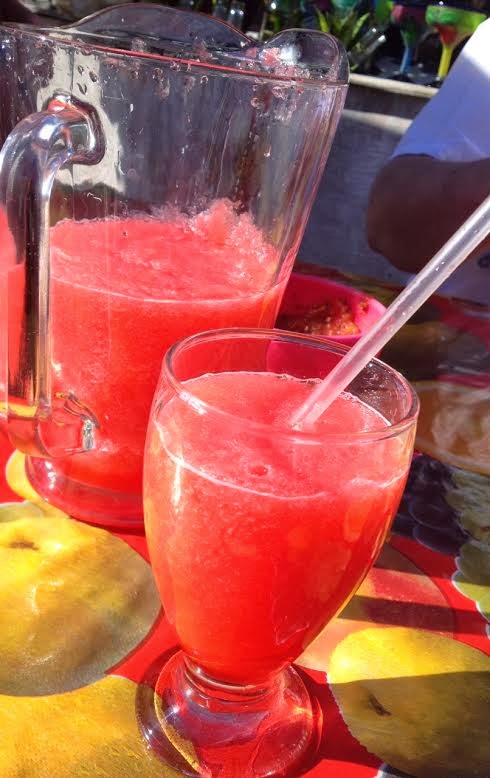 The margaritas were wonderful. 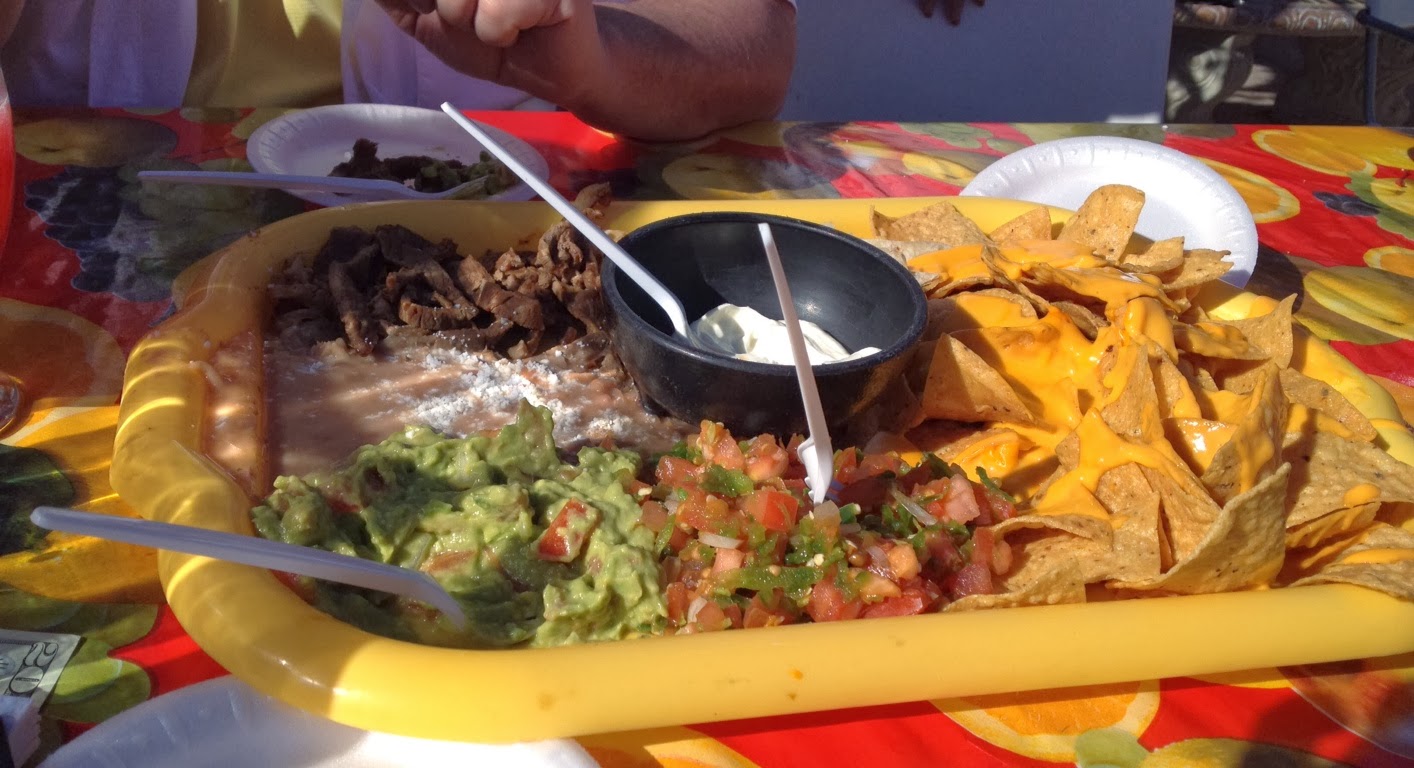 So were the nachos! 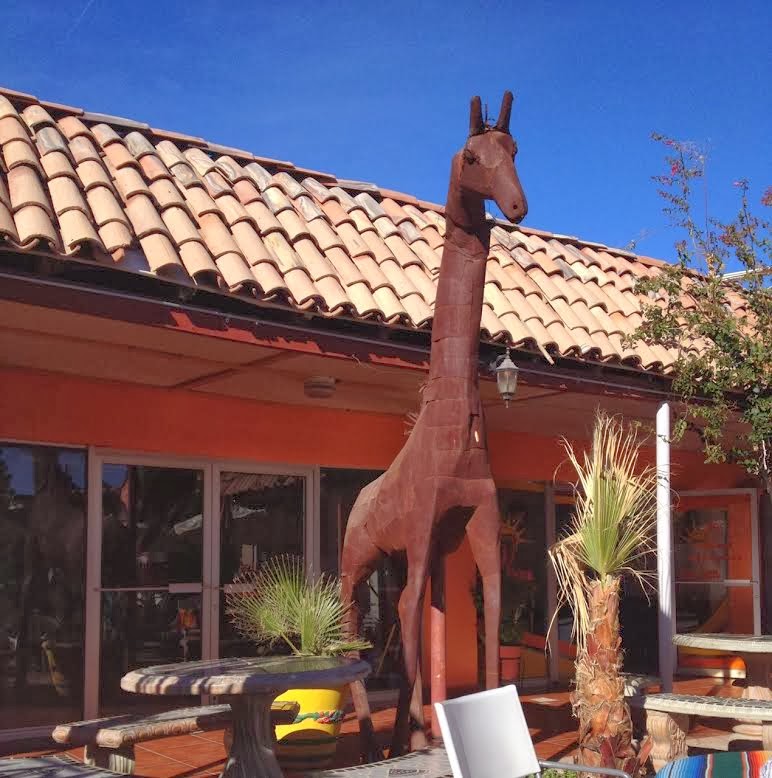 I admit to being charmed, if a little confused, by the rusty giraffe. 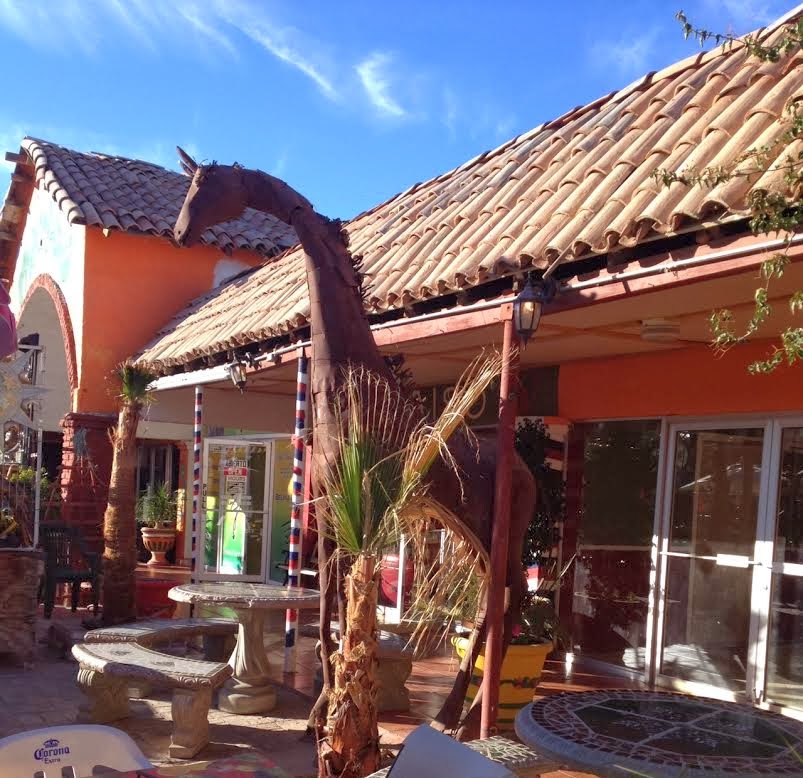 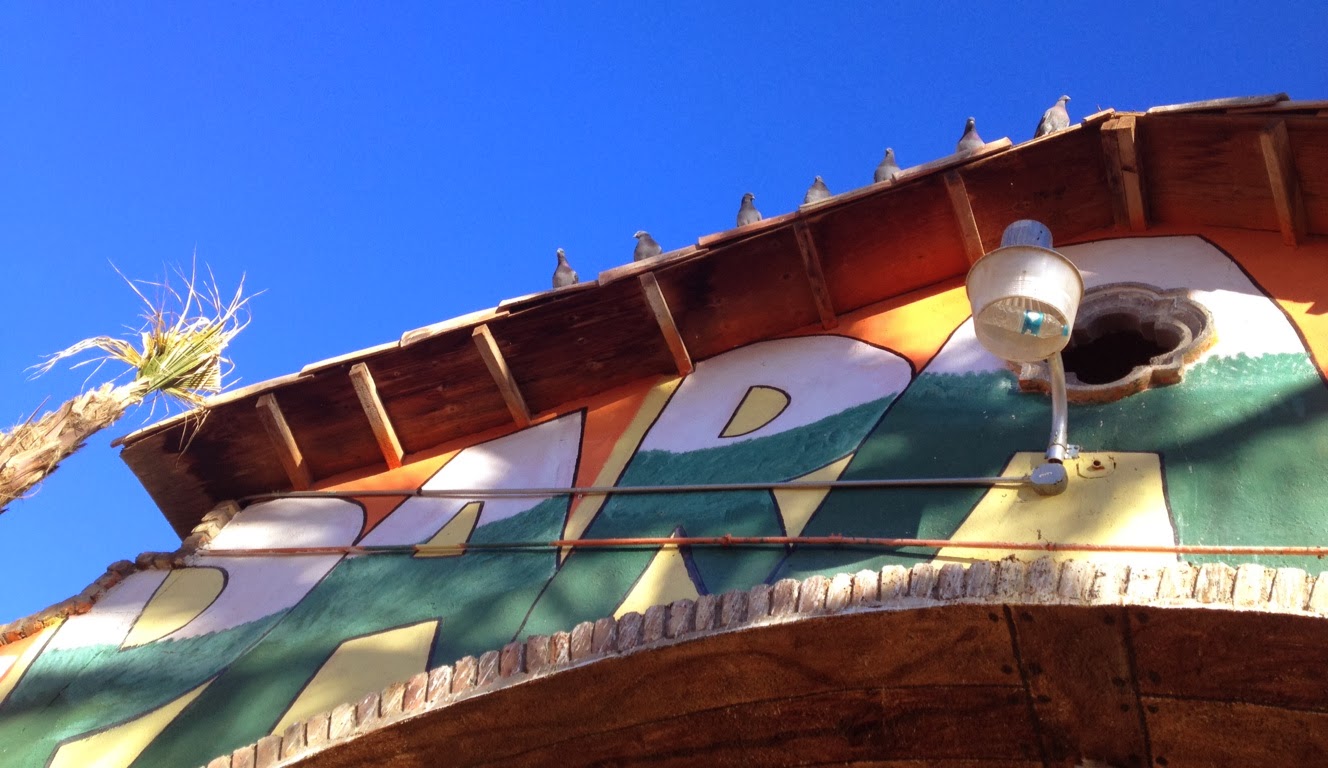 The birdies waited patiently for the leftovers.

There were colorful objects that I did not take pictures of, as well- pornographic shot glasses with clay figurines engaged in all sorts of vigorous activities, tee shirts with colorful phrases, and a flyer for a nearby brothel.

All in all, it was a fascinating day. We were flying, so I didn't bother to buy my single duty-free cheap bottle of Kahlua, but we did wander through the big purple liquor store, marveling at the hundreds of brands of tequila, and at the free booze samples being given out at every aisle.

On our way back across the border, we did have to show our passports (or in one sister's case, her enhanced drivers license), and we were asked to show our purchases. We had heard a horror story or two about abrupt and distrustful customs officers, but everyone was efficient and polite, and within 5 minutes we were back in the United States.

It was a fascinating morning. I'm very glad we had experienced guides, and if I get the chance I'll go back. There was a pair of earrings I'm sorry I didn't buy...
Posted by Kathleen Taylor at 12:51 PM