I didn't develop a sudden reluctance to use words (indeed, that would be rather odd, even if I wasn't a writer), but it seemed to me that Saturday's and Sunday's needlefelted ornaments didn't need words- the pictures said everything that needed to be said. And for those who don't know anything about needlefelting but would like to learn, how, here's a tutorial on the basics (which doesn't need very many words either).

At any rate, I'm back to typing (and writing- I am starting the 2nd draft of the MG Fantasy today. Oh- I'd been calling it a YA, but actually it's Mid-Grade, skewed to a slightly younger audience, though grownups have been enjoying it too. Hence the abbreviation change). The rewrite will take time, but it's not anything drastic, and I am thrilled to be one step closer to having this puppy ready for submission.

And I'm back to using words here. 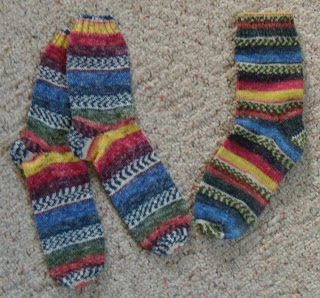 I finished  the "Mexiko" socks, which are a replacement for the missing sock from the first pair of self-patterning socks I ever knit. I'm hanging on to the single- maybe some day the mate will magically reappear. 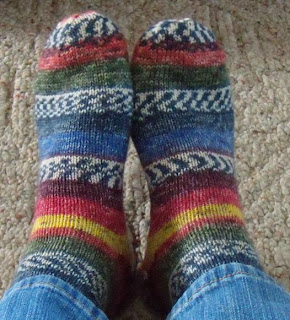 I wore them already. 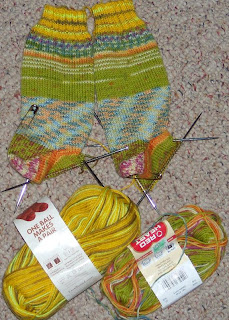 And I started a pair of leftover socks- nothing makes me feel quite so virtuous as knitting a cool pair of socks from bits and pieces of extra yarns. I feel like I'm getting something for nothing. As you can see, I'm not a two-at-a-time-on-the-same-needles person.  I seem to move along just as quickly with separate sets pf dpns.

While it was cold and nasty (and by cold, I mean below zero F temps, without the wind) over the weekend,  the storms that hit the rest of the country mostly bypassed us. We won't crow in triumph. Our day is coming.
Posted by Kathleen Taylor at 9:41 AM

Oh cool! I am a 2-at-a-time on separate needles kinda woman too! But I use magic loop instead of DPNs. Don't know that I actually finish a pair any faster but it SEEMS faster and that's what matters to me.

As always, you inspire me to try to blog more. Thanks for always sharing!