Won't you let me take you on a sea cruise?

Okay, so it's been about two years in the making, and tomorrow morning early, the adventure begins.

And it'll be an adventure- I'm being routed through LaGuardia for some reason (rather than Atlanta) and the snarl there has shortened my layover to just barely over an hour, during which I believe I'll have to deplane and get on a bus and go to a whole other terminal (and then probably go through security). We'll see how that goes.

But, that's why I'm flying in a day early (with my class materials in tow- please Delta, don't lose my suitcase). Here's where we're going. 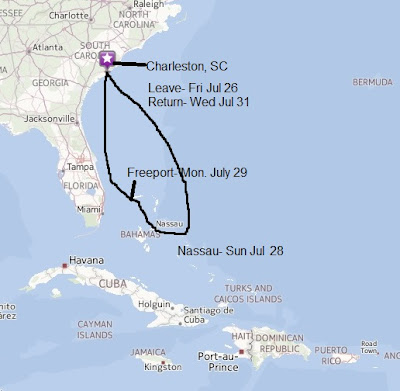 I doubt we'll make that large a loop around to Nassau, I just didn't want to draw a line through the name.

My roomie will be an old high school friend, and we're going to have such fun!

I'll be teaching classes on Saturday and Tuesday, but that's just 9am-4pm, and since one class didn't have any takers, I'll have an extra morning (or afternoon, I'm not sure), to play. And if my suitcase doesn't make it, I'll have lots of time to play, but we won't think about that.

We're staying the night of July 31 in Charleston, and I'm flying home early on Aug 1 (and leaving 9 days later for the Michigan Fiber Festival). It's going to be a blast, even if the weather looks promising nowhere on the entire trip.

Told ya so. (I got the final two days in Charleston wrong, but that doesn't matter). The precip chance is never higher than 40%, so we may come out of it dry. We'll just have to wait and see.

Internet access on the ship will be slow and expensive, so there won't be any blog posts while I'm gone (I'm not even taking the mini- it's old and slow and annoying). If I do any online things at all, it'll be through Facebook, so check there for random updates and pictures.

In the meantime, be good, and I'll come back with some great stories.

Posted by Kathleen Taylor at 12:10 PM