Ryan announces what we all already know (This. Is. American. Idol.) in the midst of some very dramatic lighting. He tells us that Crystal is here, and feeling okay (they're not saying why she was hospitalized, but I read that it was diabetes related).

Randy is wearing a red cardigan, with a darker red, cross-eyed heart applique over the breast. Ellen is in a black v-neck sweater with a white shirt and a polka dot ascot. Kara has an ill-advised pompadour and a really thick and ratty ponytail. She's wearing a gray sleeveless top with a black sequined scarf. Simon may have on a gray knit top instead of a white shirt, but it's still open to mid-chest, so it's part and parcel of the Cowell Uniform.

Crystal is up first. We're continuing with the *what no one knows about me* clips. Crystal has a twin named Carl, who is a mainstream kind of guy. She also carries a dragonfly pouch filled with talismans. She's wearing a purple tee, a black fishnet shrug, silver filigree leaf earrings, and her dreds are pulled back. She's singing CCR's Long As I Can See The Light, which should be amazing. I am wrong- it is flat out, freaking amazing!
Omigod, I haven't felt like this about a contestant since Taylor Hicks. I have heretofore avoided iTunes, but I may need to join up just so I can listen to this performance over and over. And over.

Haeley is carrying the Jasmine Trias Head Flora torch. She's also wearing a black and white girly dress. And you guys, you're never going to believe this: Haeley likes to make headbands and cute hair accessories. Whoda thunk? She's singing Miley Cyrus (another shock), and this is much better than last week. As long as you listen with your eyes closed, it's not too bad. Unfortunately, I keep peeking. Haeley simpers and grins, and has absolutely no connection with this teeny-bopper ditty.

Lacey enjoys repurposing old things that looked just fine the way they were. She's got the bedhead again, and is wearing a giant fingerprint shirt with alien shoulder pads, Mardi Gras beads, and skinny (and I do mean skinny) jeans. The Quirky seems a bit forced, and she could dial it back a notch or three and still get her point across. She's singing Kiss Me, and it's an excellent choice for her voice. Good job, Lacey. 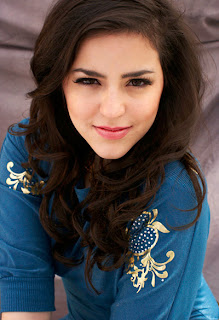 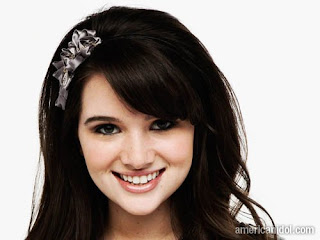 Tonight, Katie is wearing a blue flowered empire top over black leggings, and blue satin pumps. Her secret is that she can say Give me a kiss in 6 different languages, "including English". The biggest surprise is that she think's that's secret worthy. She's singing Corinne Bailey Rae's Put Your Records On. On paper, this sounds great, but onstage, the performance is totally robotic. The judges ask Katie to name a young singer that she likes, and she's stumped. Can't come up with a single name, which tells you everything you need to know.

At the judge's table, Kara keeps pooching her lips, perhaps in an attempt to look serious and grave. She should stop it immediately.

Didi is wearing a rust print tunic and a wide black belt over stiletto boots (and pants of some sort- probably leggings). She was the mascot (furry suit and all) in Middle school, and she meows to warm up before performances. She's singing Lean on Me. Oh no, this is really awful. It's totally and absolutely wrong for her voice. She's Withering away (see what I did there?). Didi should have switched out with Katie.

Michelle works with a children's choir, which as secrets go, is pretty tame. She's wearing a weird white dress whose skirt is drawn up like theater curtains, little black glovelettes that only cover her fingers, and a leather-ish bolero. She's singing a song by Creed, and while there are some okay moments, it's mostly awful.

Side note: I wonder if the kids are cottoning to the fact that it's not A Good Thing when the judges concentrate their commentary on how they look. Have they noticed that not a single judge has told Crystal that she's adorable?

So Lilly is singing Sam Cooke, eh? That should be interesting. She's dressed totally mainstream, for the Lilliverse: one long red feathered earring, and a blue dress decorated with 60's Peasant embroidery. She's singing A Change is Gonna Come, and strumming on a 12-string (though she might as well be playing air guitar for all that we can hear of it). Lilly is actually doing okay with this song, though I don't think there is room for her and Crystal in this competition, and we all know who I'm rooting for.

Vera Wang is in the audience. Do you think that fashion designers can look at anyone without wanting to re-dress them? It must be torture for her to sit in this audience and not whip out a sewing machine.

Katelyn is wearing a one-shouldered blouse that is all ruffle, a sparkly dirndl, huge teardrop earrings, and suede buckled booties. She studied recording engineering, and wants to open her own studio. She's going to sing the Scientist, by Coldplay (I say that like I have any idea who they are, or what this song is) and accompany herself on the piano (not a guitar, Ellen). This is okay, I guess. But mostly it's incredibly slow and boring.  Katelyn actually could be one of Simon's oft-mentioned Wedding/Street Corner/Karaoke singers.

Paige is dressed for a Renaissance Faire. A shiny, sparkly Renaissance Faire. She likes to color (you know- with crayons in a coloring book), and finds it meditative. I'm with Paige. One of the nice things about being a Grandma is that you get to color and no one thinks it's odd. She's singing Walk Away, by one Kelly Clarkson (penned by Kara). For the first time, I can hear that she has a good voice. This was an excellent choice for Paige.

Siobhan is in blue on blue (the color choice of nuns everywhere)- a royal satin bustier dress over a light blue polka dotted tee with cap sleeves. She also has a nose ring, and is wearing ankle socks with high-heeled booties. She's going to attempt Aretha's Think, which could be great, or a disaster of epic proportions. It's a little of both. the beginning is shaky, and she's smiling way too much (this is not a smiley song). But by the end, it's great, and that high note was amazing.

The Worst? Didi, by an easy mile, Katie, and Haeley. My guess is that Didi is outta here.
Posted by Kathleen Taylor at 11:03 PM