Food... there was food on the ship...
Food as far as the eye could see.
Food, unlimited, all day.
It was amazing.

The Windows on the Sea and the grill on the Lido deck (the former inside in the air conditioning, the latter outside but in the shade of an upper deck) served a continental breakfast beginning at 7am on sea days. Since I was always up well before that, I spent several mornings haunting the area, waiting for the food to appear. The continental breakfast consisted of several areas, each devoted to different food groups: cereals/yogurt/milks (large variety of all), breads (muffins, croissants, sweet breads, white and wheat bread/ a toaster, plus butter, jams, honey and peanut butter), and fruits (all kinds), sliced meats and cheeses. Coffee, juice, lemonade, and water (and ice) were always available. At 7:30, the Buffet opened, with a rotating variety of cooked foods: eggs (many varieties, including Salmon Eggs Benedict), pancakes, waffles, omelettes cooked to order, hash browns, biscuits and gravy, and meats (the link sausage was particularly good). I usually started out with bread and coffee and and my kindle, reading and watching the sun rise in the nearly deserted room, and then I'd hit the line for sausages (or bacon).
As with every meal, unlimited amounts were available of all foods.

If you were up a little later, and in the mood for a sit-down served breakfast, the dining room opened at 8:30 (except on land days, when it opened an hour earlier). You would be whisked to your table, your napkin gently placed on your lap, a glass of water filled for you (and then orange juice, milk, tea, or coffee if you wanted- all four if you liked). Each day the menu varied, with openers (usually fruits), and then breakfast entrees. The one morning I ate there (the Freeport morning), I had waffles, which were wonderful.

Lunch (served until 6pm in one spot) was organized like breakfast (except no dining room service). Each day, the buffet had different entrees (meatloaf, roast, chicken, pastas, etc), or you could go to the Mongolian Wok for stir fry, or to the Off the Grill for hamburgers and pizza. The dessert table always carried a variety of cupcakes, cakes, cookies, jello, and cheesecake (some of the cakes were not serve-yourself, a helpful worker stood by to cut your portion). There was also the ice cream machine, dispensing vanilla, chocolate, and twist... all day... all night...

For supper, we went to our assigned dining rooms, and every night, the menu was amazing. You could have stand-bys like fried chicken or a large hamburger (half-pound) every day, but each day there were also varied appetizers, entrees and desserts. I didn't take pics of all of the meals, but trust me, they were all delicious. Afterward, you could choose from a list of desserts... yummy yummy desserts (perennial favorite: warm chocolate melting cake with vanilla ice cream).

Though I haven't mentioned it, there were vegetarian options at all meals.

There was lots of food... lots and lots of it... and all of it was pre-paid. You only had to pay for alcoholic drinks, sodas (if you didn't have the endless soda sticker on your ID card), or coffees and desserts from The Bistro (about which more later). 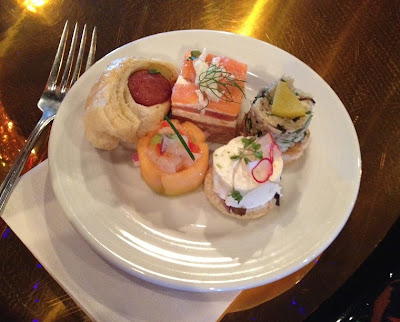 I've posted this one already, but it bears a re-post. These were the noshes available for our Knitting Cruise Meet & Greet. Upper left and around the circle: little sausages in Phyllo, layered salmon and cream cheese and dill, chicken salad on teeny bread circles, cream cheese and bacon (I think- I don't remember for sure) and radish on teeny bread circles, shrimp in a cantaloupe cup. 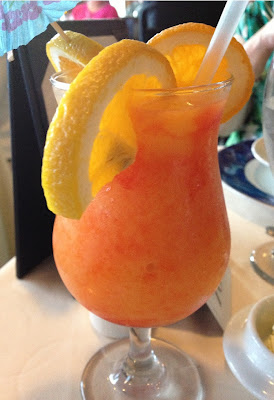 This was DeeAnn's drink at one supper- maybe our elegant evening (the one where we wore dresses). It's mango and orange and lemon, and maybe pineapple. 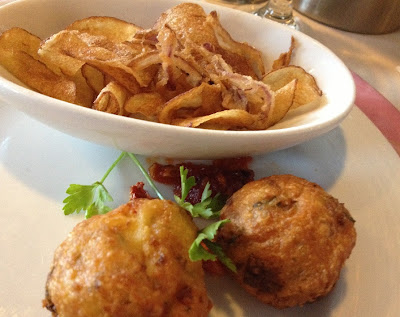 My appetizer one evening- alligator fritters and home-made potato chips. Yes, you read that correctly: alligator. 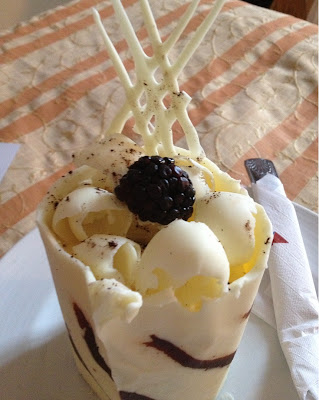 Though the drinks were expensive on the ship, and the fancy coffees in The Bistro were priced pretty much the same as on land ($4+ for a large latte), the desserts and pastries were exceptionally reasonable. This white chocolate cup, filled with white cake, mousse, frosting, white chocolate curls, and a blackberry was huge, maybe 5" tall and at least 3" across. It cost $2.25. Yes, two dollars and twenty-five cents. The two of us could not eat it all in one sitting.There was also a dark chocolate version, same size, same price. 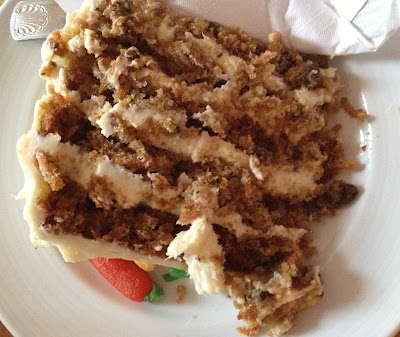 Another bistro treasure- carrot cake. Also $2.25. I do not think the photo gives justice to the size of this thing- the layer cake itself was about 8" tall, and the slice was generous. Also delicious. 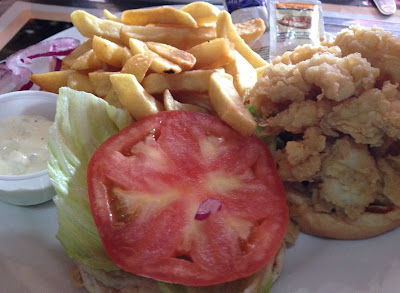 In Nassau at Fish Fry, we had conch. I had a Conch sandwich, which consisted of breaded and fried conch strips and a jalapeno mayonnaise dipping sauce. I had to eat at least half of the conch strips before I could assemble the sandwich and finish it off. Man, it was good. 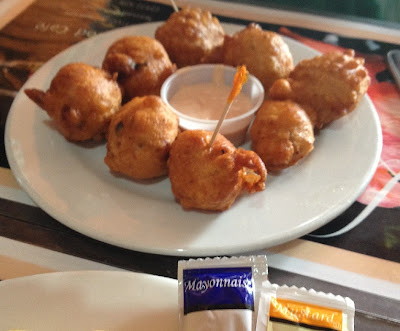 DeeAnn ordered conch fritters- the one thing she absolutely wanted to eat in The Bahamas. They were oh so good. 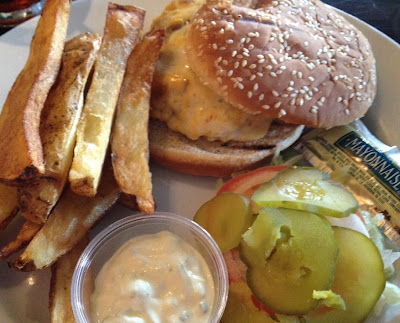 In Freeport, I had another conch sandwich (sense a trend here?). This one was a conch patty, smothered with pepper jack cheese. It was every bit as good as the first one. The on-land meals cost about what a good lunch in a restaurant in the states would cost ($8.95 for a sandwich). 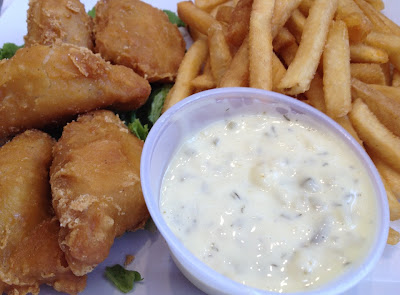 My most expensive meal was the one I ate in the airport in Minneapolis on the way home. I had conch in The Bahamas and breaded walleye in Minna-soda. This plate cost me $13 (it was good, but airport food is always expensive).

I wish I'd taken more food pics- it was all amazing. On the other hand, I will be carrying reminders around with me for awhile, if you know what I mean.
Posted by Kathleen Taylor at 1:34 PM

WOW!!! Those all look and sound amazing. What a wonderful trip you had. I'm not surprised they invited you back to teach more classes. I so hope you go.