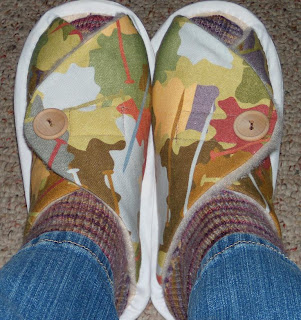 Are these cool, or what? I finally made a pair of Pitter Patters for myself. I used some of the canvas knitting camo fabric that I designed through Spoonflower for the uppers, fuzzy stuff for the lining, and Jiffy Grip for the soles. As I suspected, this pattern runs toward the Narrow Foot spectrum (not a pattern problem, I am descended from Wide Feeted Peoples). Luckily, the pattern is multi-sized- as in it fits infants through adult men- so it was easy enough to use the Large Adult pattern, and then just shorten the heel by about an inch. There's enough overlap in the uppers (they're Velcro adjustable) for many foot widths.

The slippers are cozy and comfy. I don't suppose they'll hold up to long-term wear, but for fun (and for travel), they're perfect. The only change I made in the pattern was to sew the bias tape binding to the bottom of the slipper sole and hand stitch it down on the top (rather than the other way around- there is no way that I could hand sew through the Jiffy Grip, and I didn't trust my machine seaming to look neat enough if I tried to do it that way). 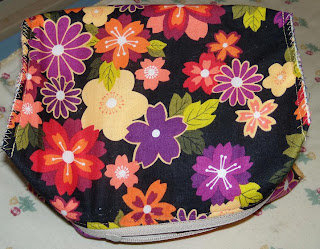 I also made a small zipper box-bag from the same fabric (tutorial here). I dug through my collection of fat quarters and found this one for the lining. I thought it was  pretty enough to show you. 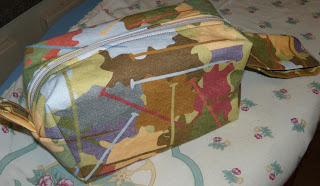 Here's the bag from the outside. I still have a hard time getting my corner seams straight, but that doesn't matter much. I altered the pattern without realizing it- the handle is supposed to go from corner to corner, but I put it at the top by the zipper. I actually like it better there, and it's much easier to sew in. I also added a tag at the bottom of the zipper to make it easier to close the bag. I used some heavy duty interfacing, and the bag stands up by itself very nicely. 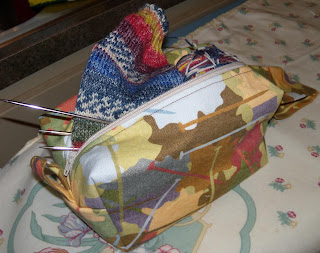 It's the perfect size for toting around Socks in Progress. 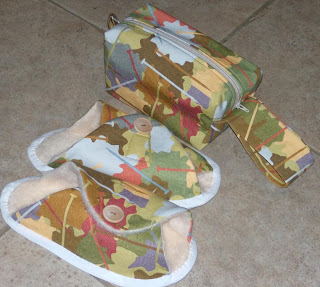 After Christmas, I can show you pics of some of the other slipper/box sets I made. And I still have a few more to sew and the calendar is ticking, so I'd best get busy.
Posted by Kathleen Taylor at 9:24 AM