I was able to spend a lot of Saturday watching real weavers do their work. It was amazingly instructive just to see how people who know what they're doing, do what they do. I am all for winging it (it's my Standard MO), but when I can learn, I am happy to do so. I was especially interested in learning about warping a loom (warping is to weaving as steeking is to knitting- scary for many people).

Connie spent much of Saturday using a warping board to wind warp for her 8 harness floor loom. I'm sorry for the quality of some of the pictures- sometimes my phone takes great shots, other times, not so much (which tells me it's the photographer, not the camera). A warping board allows the weaver to wind hundreds of lengths of warp, many yards long, without having to walk around a building to do so. 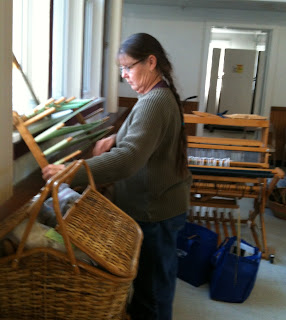 Anyway, Connie wrapped and wrapped and wrapped fine green thread around a complicated systems of pegs (It wasn't just wrapping, there was some looping involved). She was doing some counting, so I did not want to disturb her to ask silly questions. And I'm sorry that I didn't get a closeup of the warping board. Here's picture of warping boards, all loaded up.

I also didn't get a picture of Connie taking the warp off the board- she hand chained it to keep the strands from tangling. Then she spent the rest of the day, threading each thread (hundreds and hundreds of them) through metal reeds using little white threads. I wasn't able to stay until Sunday, but I imagine she was able to start weaving by late evening on Saturday. 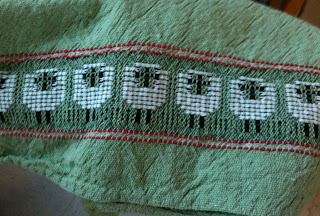 This is what she's making- wonderful wonderful tea towels and runners with SHEEP WOVEN INTO THE CLOTH!!!!!!! (Connie apologized for not having the towel ironed first- but you can see that there's some really intricate woven texture there...)(apologize... pfft... when you can do work like this). 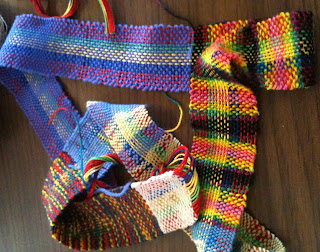 Sort of makes my beginner band, woven on the warp that came with my Beka loom, look sad. It certainly looks like a first try, though I'm pretty proud of it anyway. I finished weaving that band, and took it off the loom, and then took a deep breath and started to warp my loom (with a lot of advice from the others). 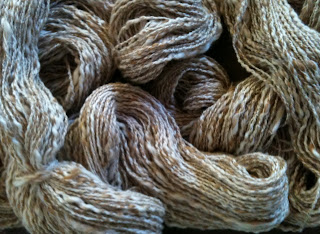 This is handspun organic cotton- I have a lot of it, and I decided it would be serviceable warp and weft for a future bag. 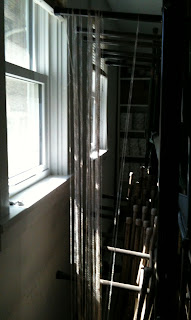 I only needed 20 warping strands, and my loom will only handle about 12' of warp, so I didn't need to use a warping board. I looked around and improvised- my warping board was an upright table stand. I wound the yarn around the upper and lower legs 20 times. 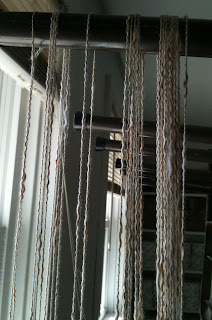 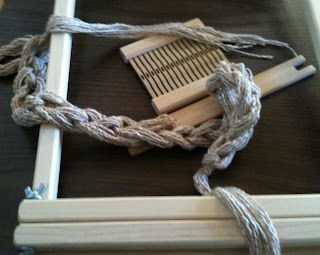 And then I cut the strands and hand chained them (they managed to tangle anyway). 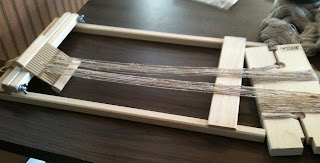 I fed the individual strands through the holes in the heddle (I don't know if they have a specific term) with a teeny little crochet hook. Every other strand went through a hole in the center of the reed (I think that's the term), so that the strands (the shed, I think) can be lifted and lowered for weaving. The warp was then pulled straight (untangling what was tangled) and wrapped around the backboard (not the right term, I'm sure).

Update: Connie P just told me that the long skinny holes in the heddle are *slots* and the ones with a hole in the center are called *dots*. Woohoo for correct terminology! Thanks Connie- and thanks again for the encouragement! 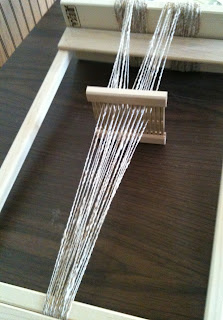 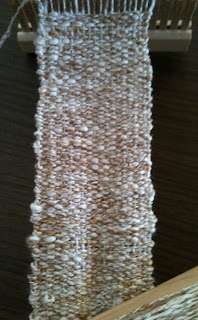 And here's some of my first weaving with the cotton yarn. It's a nubbly, thick and thin yarn, which accounts for some of the unevenness along the selvedge edge. But it only accounts for some of it. The rest is all me (and since I spun the yarn, it's all me anyway). I am packing the weft fairly tight for this strap, because I want the fabric to be firm and sturdy. I'll weave the body of the bag a little looser because it will be lined. 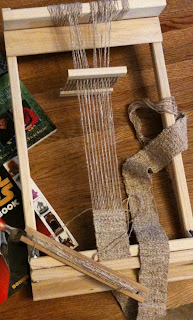 And here's what I wove on Saturday afternoon, before my back gave out (there's a lot of Leaning Over in weaving). I am thrilled. Totally thrilled. By the time I get this warp all woven, I'll be ready to tackle a wider project- which will be the body of the bag. I have a lot of this handspun cotton on hand, in several colors (white, dark brown, blue, green), so I think I'll make the body plaid.

Part 3- everything else, tomorrow.
Posted by Kathleen Taylor at 10:31 AM

Okay, the complicated part of the warping board is getting a cross so you don't have tangles (well, as many). The rigid heddle loom that you have has "slots and dots" - you put an end in a slot, then in a dot. That allows the warp to separate for the weaving. You have done a great job and you can now go on to greater projects. You also can stick with a rigid heddle and never go on to a "regular" loom. There is much that can be done on a rigid heddle and no-one should feel ashamed that they are not using a "real" loom. Your loom IS a real loom! Congrats.

Thank you thank you! I updated the post with the correct terms. And thanks again for the encouragement- I'm really enjoying exploring this new obsession...