I finished knitting a pair of mittens from the spindle spun and plied  Enchanted Forest yarn (Merino/Bamboo). I knew that they were going to be about as un-matching a pair as possible from the same yarn, but they turned out pretty anyway. 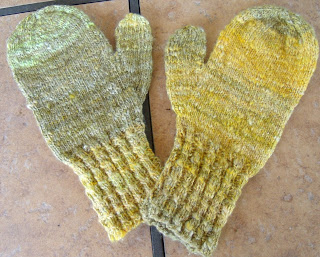 I did what I could to make sure that the darker yellow was prominent in both mittens, but beyond that, they are what they are- pretty mittens that do not look alike.

I did some playing with the ribbing though. One of the Interweave e-mail digests featured a no-cable-needle cable stitch that involved YOs and K2tog. I tried their version, and didn't like how it came out- the YO made a hole, and the whole effect was more lace than cable. So I experimented. 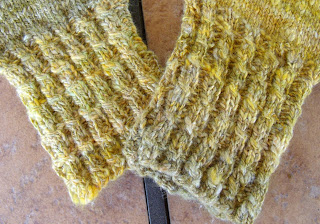 This is what I came up with. It looks cable-ish, there are no holes, and yet it's nicely elastic.


(I didn't try it, but I'll bet you could make the cable go the other direction by doing a regular K2tog on Rnd 3, and on Rnd 4, pick up the replacement stitch after the K1).
Posted by Kathleen Taylor at 12:45 PM

When you say "Pick up and knit 1 st from the previous stitch, a row below the needle" is that the same as a Make 1? In any case that means you have extra stitches the next round.
I'm extremely confused as when i've tried this it looks nothing like your knitting and also nothing like a cable.Also the ribbing has gone out of synch due to the extra stitches created by picking up the stitches from the previous round.

On the round previous, you have knitted 2 sts together through the back loop so you've already decreased one stitch per cable/rib. On the *pick up and knit* round, you are replacing the stitch that was decreased, so your stitch count remains the same.
I prefer a *pick up and knit* for increases, both for the look of the increase, and for the name (Make 1 meant something entirely different in my childhood, and I cannot bring myself to use it- besides, I don't think it explains what is happening very well, which is increasing a stitch). I hope this helps