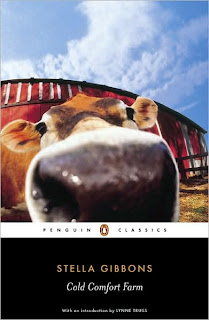 I don't  know how I managed to get to  the ripe old age of umpty-umph without having read Stella Gibbons' Cold Comfort Farm, and I don't know what brought it to my attention at this stage of the game, but I'm glad. The story of young Flora Poste, orphaned and  in possession of only a subsistence inheritance but no desire to earn a living, had me chortling from beginning to end. Flora descends, with her patronizing, no-nonsense ways, on her rural, distant relatives, The Starkadders, who have always lived at Cold Comfort Farm, explaining to her horrified friend :"Well, when I am fifty-three or so I would like to write a novel as good as "Persuasion", but with a modern setting, of course. For the next thirty years or so I shall be collecting material for it. If anyone asks me what I work at, I shall say "Collecting material." No one can object to that. "

If the tireless Flora resembles any Austen heroine, it's Emma, bossing and rearranging the Starkadders as she pleases, plunging into messy personal situations with aplomb ("That would be delightful," agreed Flora, thinking how nasty and boring it would be. ), and meeting her match in Aunt Ada Doom, who once saw something nasty in the woodshed.

The uphill battle ( It was curious that persons who lived what the novelists called a rich emotional life always seemed to be a bit slow on the uptake. ) is all of the fun. I will say that the book feels, at times, to be all teeth and no bite, with the resolution coming on suddenly and almost too neatly. But the ride is such fun. 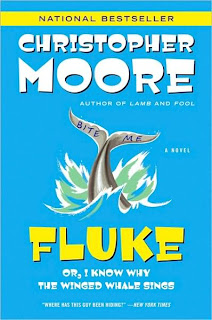 I've been on the Christopher Moore train for awhile now, and this is my 5th or 6th Moore in the last few months, so I know what to expect. But even so, Fluke, the story of whale researchers, and what they find,  is out there. Even for Christopher Moore- he of ancient creatures who wreak horniness on small California towns, and creator of Jesus's childhood friend Biff- it's out there. Hilarious, and as always, great fun to read, but man... it's out there... 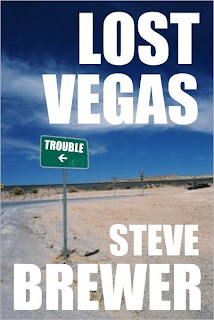 Why would an ex-mob hit man hire someone to rob his own casino? Steve Brewer tells us in Lost Vegas, his expertly crafted and written heist novel. I have never understood why Brewer isn't more well known- he certainly deserves to be. This novel is only available as an eBook- go buy it. You won't be sorry. 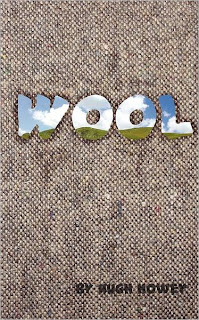 I honestly don't know what to say about Wool, Hugh Howey's novellette (novella? long short story? fairly short book?). The post-apocalyptic characters live underground, and have lived underground for so long that the reasons why have been lost to history, or maybe to revisionists. Either way, questioning the arrangement can get you sent Above, to die. The Sheriff's wife was one of those sent Above, and now he wants to go, to find out for himself, if the surface of the earth is really a vast and deadly wasteland. It's a glum and depressing tale that ended in a way that I really didn't expect. I didn't love it, and I didn't hate it, but I wasn't tempted to move on with the next books in the series (as far as I can tell, the books are set in the same universe, but all have different characters). But now, after some time has passed, I find myself still thinking about the book, and I'm curious to see what happens next. So I think I'll buy an omnibus with books 1-4 and see. I am totally confused about the titles. #1 is Wool, #2 Proper Gauge, #3 is Casting Off,  #4 is The Unraveling, and #5 is The Stranded, but so far as I can tell, the stories (which are longer in later volumes) have nothing whatsoever to do with knitting (and I'm not hallucinating- those ARE knitting words, right?). So strange. 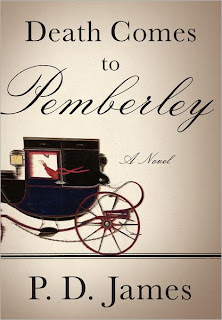 P.D. James, noted British mystery writer, has written a sequel to Pride and Prejudice, which is also a murder mystery. It's also deadly dull, with absolutely none of the joy and humor of the original. I didn't finish it. 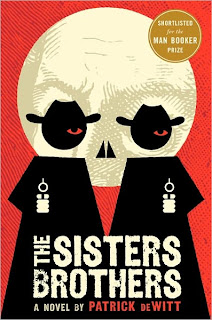 I not only finished Patrick deWitt's The Sisters Brothers, I devoured it. The story of a pair of Old West brothers, one of whom is having second thoughts about being a hired killer, is extremely True Gritish, except that I liked this book a lot more than True Grit. I laughed out loud a couple of times (once in ATL- people looked at me funny). I also cried. I thought it was marvelous. I am not the only person to think so- it was shortlisted for the 2011 Man Booker Prize. I eagerly await the inevitable movie. (Side Note: there is a whole category of Sisters/Brothers books that I discovered while looking for links to this one. I now need to go and bleach my brain). 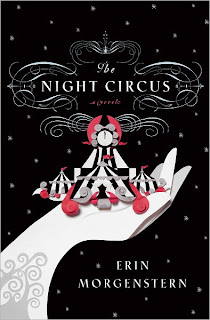 I suppose The Night Circus will be nominated for all sorts of awards too- much of the world is falling all over itself with praise for this fantasy about a selfish bet between two magicians, and the circus where the much of the action plays out. I didn't hate the book, but neither did I love it. Or even like it very much. It felt far too convoluted, far too purposely dense, far too... I don't know... much effort... for me. I wanted to love it. I expected to love it. I hoped to love it. But I didn't, in part, I think, because it doesn't play by proper fantasy rules. I don't care if the magic isn't explained, but the rules of the magic have to be set and followed in order for me to willingly suspend my disbelief. In this book, there seemed to be no rules at all- need a clock maker who can fashion amazing time pieces from almost thin air? You got him. Need someone who can stop time? Yep. Need someone who can build structures from paper, that can hold humans? Indeed. Is there any sense or logic to these powers? Nope.

But, I'm definitely a really tiny minority- the praise for this book is almost universal (on Amazon, less than 100 of 800 reviews are 1 or 2 star, and over 400 have 5 stars). So don't take my word for it. Go read this one, and tell me what you think. I'd love to hear.
Posted by Kathleen Taylor at 3:09 PM

Email ThisBlogThis!Share to TwitterShare to FacebookShare to Pinterest
Labels: books

Yes, those ARE all knitting terms as far as I can tell! I saw the title of the book and thought it would have something to do with knitting or sheep. How odd.

Too bad about Death Comes to Pemberly. I have it on my waiting list at the library. Somehow, I suspected that it might not be a winner, given the past few PDJ's. Cold Comfort Farm is one of my top favorites. I will have to try some of the others.

I just finished The Night Circus and found it delightful in the way which I took so quickly to Harry Potter. It leaves me awaiting a sequel which I equally hope does not get written. I am now off to see if the library has the wool series as the knitter in me is intrigued.

Maxine-I knew that I was in a very small minority... heh...

I wonder about the rest of Wool too- it has a post-apocalyptic dystopian setting, and the first book had nothing to do with any sort of handwork. I would have thought that the *wool* title had more to do with old sayings and cliches, but the rest of the titles are definitely knitting-related. It's a mystery.