We're having what passes for *weather* in these here parts this morning... a couple raindrops and everyone scrambles to find their dusty umbrellas. Though I shouldn't laugh- I'm heading home on Thursday, and even though the weather will be much more mild than usual in January, I am still going to bitch and moan about 18 degree weather after 3 out of the last 4 weeks spent in warmer climes.

We haven't done anything specifically *trippy* this time- we intended to spend 2 weeks just living regularly and enjoying The SoCal Grands, which we have. That means playing with Legos. 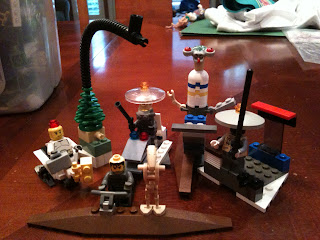 These droids are not the ones anyone is looking for. 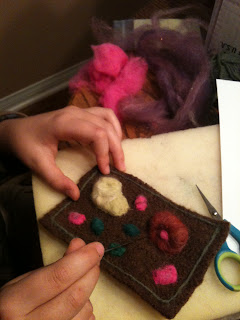 And helping with homework. Voracious Reader had to make a 3-D plant cell model, using any materials she chose. She considered Jell-O (side note: Children younger than 45 do not get the *there's always room for Jell-O joke*) but switched when I suggested needle felting. Above you can see the cytoplasm, the cell wall, the nucleus, the mitochondria, and the chloroplasts. I think she did a smashing job! And I suspect that she's the only 5th grader making plant cells out of unspun wool. 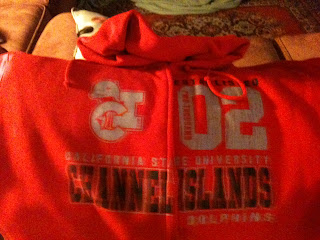 The Hub did claim the gray zipper hoodie, so I had to suck it up and buy myself another. I like the red better anyway, and it'll be so much easier to take this one off when going through security (as opposed to the pullover dance whereby I try to remove the outer layer while leaving the inner layer in place.) 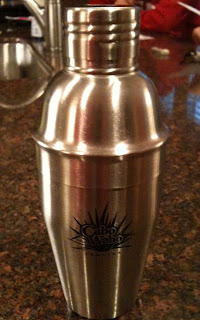 Outside of multiple sweatshirts, I haven't done much shopping, though I ran across this little cocktail shaker in a liquor store. It was marked $1.59, so I snapped it up even though it has a Cabo Wabo Tequila logo on it, which probably means that it was supposed to be free. On the other hand, I had priced shakers on eBay, and was willing to spend much more for a non-logo one, so I got a good deal anyway. We'll see if the TSA allows it in my carry-on. 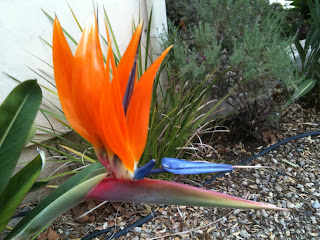 It wasn't until this morning that I remembered to take the Obligatory Bird of Paradise Photo.
You're welcome. 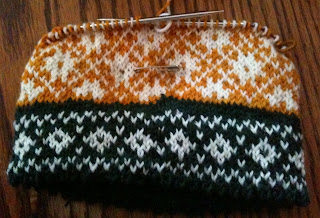 And finally, The Doll Sweater That Is Not From Hell But Still Absolutely Will Not Be Done By Thursday, is coming along.

As I said, nothing especially touristy this time around (though I still need to talk about the food- OMG! The FOOD!), and it's been the best trip ever.

Posted by Kathleen Taylor at 11:18 AM