We're home. The flight from LAX to FSD was smooth and on time, and as short as a non-stop flight can be, and as comfortable (if we ignored the kids kicking the backs of our seats the whole way), but there's no way around it- flying is tiring. We spent the night in Sioux Falls, did a SAM's Club run in the morning, and were home yesterday by early afternoon, after which, we collapsed. Okay, I caught up on Facebook, and THEN I collapsed.

Today feels mostly normal, except that it was -14 this morning. Air temp. The heretofore mild winter and the many travels to warmer climes, have left me totally unable to process even this minor cold snap (and believe me, it's minor compared to what it can be). Otherwise, I'm mostly back on Central time, and almost raring to get back to work. Did I mention that I broke a tooth in California? It doesn't hurt (yet), and I don't even know how it happened (no biting on hard things, no blows to the face, nothing to precipitate chunks of tooth falling away), but Monday morning I have to go and have it repaired. So no matter how raring I am, work won't commence until Tuesday. After the numbness wears off.

In the meantime, I want to talk about the food we ate... the excess and totally delicious food that we ate... the thousands of calories of wonderful food... 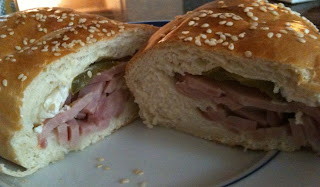 Doris's Bakery Panaderia doesn't have a website, but you can see that I'm not the only one who loves the food there. Several times, we ate these ham, cream cheese, and jalapeno sandwiches, though they aren't exactly sandwiches- the filling is baked inside, so they're more like stuffed individual bread loaves. The bread is soft and delicious and the peppers will set your mouth on fire (in the best way possible). In Camarillo, saying *authentic* Mexican food is redundant- it's all authentic, and it's all amazing. 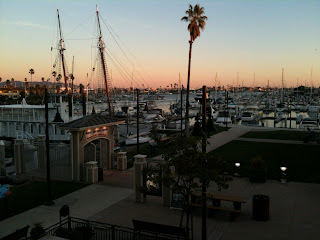 One evening, we ate at Moqueca, a Brazilian restaurant on the marina at Oxnard. This was the view from the balcony (and the evening was as soft and warm and beautiful as it looks in this shot). The food was absolutely fantastic- I had the fish moqueca, which is a sort of soup made with tomato sauce, coconut milk, and cilantro, cooked in a clay pot. It was delicious, though maybe not quite as delicious as the passion fruit mousse that I had for dessert.

On another evening, we ate at Boccaccio's at Westlake Village, where the marinated salmon was perfect, and the apple torte was even better. (And lest you think that we dropped bundles on these restaurants- Curt won gift certs for free meals at both. Wonderful FREE food. The best kind!).

But it wasn't all fancy restaurants- we ate as several other small cafes and eateries. We ate at Taqueria Portrillo's, where the huge, spicy pork burrito was more than I could eat. 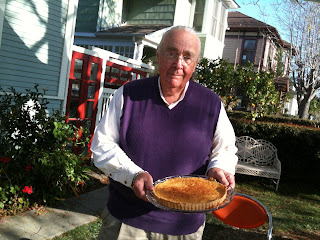 Michael made this Meyer Lemon Torte for my class at Loop & Leaf. It was even better than it looks, and we snarfed up every crumb. 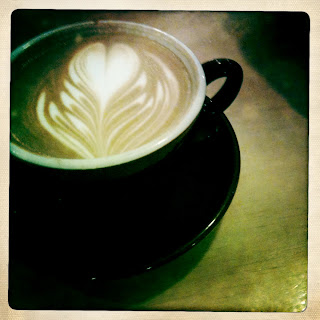 As often as possible, I stopped in at Element Coffee, first for their lattes, and then for the mochas (they make their own dark chocolate sauce). I freely admit that I know nothing about coffee, but they serve the best I've ever had. And they're pretty to look at, too. 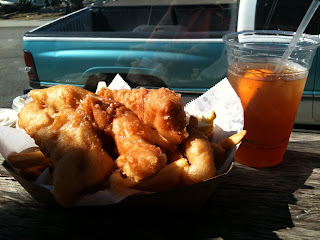 On our last full day in SoCal, we went to Ventura- ostensibly to walk the beach a bit, but mostly to try this fish place that Curt had heard about. Spencer Makenzie's Fish Company was everything he'd heard, and more. I grew up with fish 'n chips, and can never find any in SoDak (any worth eating that hasn't been made by hand, at home, anyway). I'm always on the lookout for good fish places on our travels- and this one fits the bill. I only wish I'd know how big the servings were- we could easily have split an order. Their tartar sauce was great- with a bit of chili and lime mixed in.

But it wasn't all eating out...  We picnicked, and cooked in a lot, including great pizzas made with Trader Joe's pre-made crust (that one was the Tooth Killer), and Curt made us Scotch Eggs for supper, which he paired with assorted beers, because, you know, he's The Beer Guy in the family (and he was right- the pairings were perfect). One evening, Voracious Reader and I made strawberry jam, and the next morning, I whipped up the ugliest orange marmalade in marmalade history.

See? Uuuuglaaayyy. But by cracky, it tasted just fine.

The result of all these calories? About what you would guess. Though we did walk miles every day, it wasn't enough to offset the intake, so food is going to be boring, and limited, around here for awhile... Hurray for pictures and memories.
Posted by Kathleen Taylor at 12:29 PM

I'm drooling . . . not only at the pictures but at your descriptions! You are so darn much fun to read!

Thanks for all the great restaurant recommendations! Always nice to have for when we pass through those towns.

I have been waiting for the food post....and it was worth it. What a perfect vacation!!!