Catching Up, and the Pleats From Hell

Sorry about the blog silence- it's been busy here.

On Tuesday, we made the ugliest  Orange Ginger Marmalade in the history of the world- it's opaque and it sort of looks like creamed corn, but it sure tastes good. I did take a picture but I can't find it right now. To make up for the ugly marmalade, I also made a small batch of apple pear butter. Much prettier and equally tasty.

On Wednesday, we went to Santa Barbara, where I taught a class at Loop & Leaf. The store is lovely, the staff is warm and friendly (and Michael made us a fantastic lemon tart), and the students, as always, were geniuses. 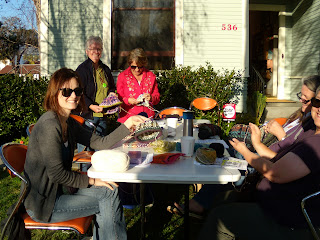 In the morning, we worked inside, but in the afternoon, we set up outside, in the lovely shade. Everyone made excellent progress on their Fair Isle Hats (and most of the students worked the adult size, so no one finished, including me). I hope to teach more classes there next time I'm in SoCal.

And I've been knitting in the evenings... also saying bad words and muttering and being really really frustrated by the Pleats From Hell. I've mentioned that I'm knitting a doll set from a gorgeous pattern from Malfrid Gausel. I read the skirt instructions in advance, and even with the translation oddities (more about which later), the process made sense in theory.

Practice was a whole other thing. 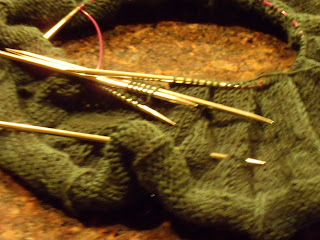 In order to knit the pleats, the first 6 sts had to go on one dpn, the next 6 sts on another dpn but twisted, and then they were matched up with the next 6 sts on the circ (which btw, would be too big for the finished rnd, so at the same time, I was switching to a smaller circ). After the needles were lined up, then 3 sts, one from each needle, are knit together, and then the next, working through the 6 sts. That sounds simple, but man oh man, it's not. By the time you get to 2 sts left, the dpns were falling out all over the place and stitches were dropping and I was saying more bad words than My Grands had heard in their entire lives. It was like wrestling with a 5 needle bind off except nothing was bound off. There are 15 pleats in this dad-blasted skirt... it took me over 2 hours to work my way around. 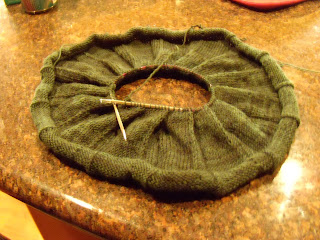 It's beautiful, and once I finish knitting the casing for the elastic waist and block it, it'll be done, and I can move on to the sweater, which will be ever so much easier. I can guarantee that I'll never knit this skirt again...

It's a well that I'm an experienced knitter, otherwise passages like this would have left me scratching my head (and this is an exact quote from the instructions):


You might use ndls a half no less than you use else here and change to the one you use after.

Sew 2 machine seams along each side where the arms come.

It's going to be a gorgeous set, but as I said, I'm glad I'm only knitting it once.

Today, it's a quiet day. This weekend, we're going to a Spinner Faire (woohoo!). Sometime next week, we're going on a short cruise. Time is going by much too quickly.

Posted by Kathleen Taylor at 12:34 PM

I knitted some "pleated ballet flats" that had a very similar pleating scheme - and they were super close together around the toe of a slipper. They were a huge pain, but they are adorable. Not sure I will ever make more.

It looks like a badly behaved voodoo doll full of pins in the first photo and it looks LOVELY in the second photo....
I can't even begin to imagine doing it and reading those instructions. The fun part would be the translations. Like reading foreign blog translations. I love how the words and phrases turn into some kind of poetry.
anne

Speaking as one of your students from Loop & Leaf, it was definitely YOUR genius that made us shine!
Ann McG

How many sts did you Cast on? what is the set up pattern? I really love to try this skirt. Please let me know. Thanks

Irene, the pattern is here: http://www.doll-knitting-patterns.com/0019-knitting-doll-patterns.html

It's a complex pattern but it looks beautiful when done.